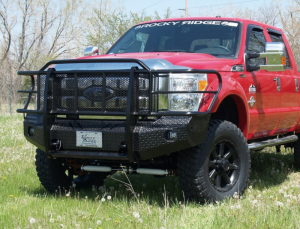 As any able-bodied truck rumbles up through the hillside or quarry, it isn’t just the bumpers that make them as mighty as thunder, but when they are as heavy-duty as these Thunderstruck products, it sure makes a difference! It’s no mistake that some of the greatest rock and roll bands of all time wrote about thunder when they described summoning power, and everyone here at the Bumper Superstore has always considered Thunderstruck’s line of products some of the best on the market and entirely at the top of their game.

Thunderstruck’s square tube design allows their extra-durable steel lattice to be the ultimate caretaker for your grille and provide protection for the headlamps that may undergo force from brush and inclement weather. Thunderstruck certainly meets the definition of American Built, cranking out their awesome bumpers from a 182,000 square foot facility in Abilene, Kansas. These down to Earth Midwesterners are the same folks who assemble Cessna airplanes, and they always do an amazing job with the build and finish.

Which Type of Vehicles Does Thunderstruck Build For?

You can equip any of these rough ridin’ trucks that are always ready to tackle an offroad adventure with a Thunderstruck Bumper:

When adventuring in nature’s playgrounds, there can be some scenarios which quickly become harsh, and it’s these situations  where this trusty brand truly shines. Proudly offering you a 1-year manufacturer warranty, the Elite Series has been hailed by satisfied customers for protecting trucks after a head-on collision with deer at over 60 mph! Browse all of the great bumpers from Thunderstruck right here today and be prepared to fully equip your truck with one of these powder-coated and fiercely-protective works of art!